There must be a time in life of everyone where they've lost their bike. Surprisingly, it never happened to me. I don't know if it is because of the paranoid me that I am or what but I always took all precautions to safeguard my bike against theft.

Despite all this, a day came when I had graduated into studying Engineering at a college that was 20 KM away from home and I could no longer use my bicycle. Theoretically, I could have but then I was no Hercules (Good pun eh). Practically, it made more sense to use the... the dreaded.. Bangalore's Public transport. Once I started using the buses, though, it wasn't as bad. Perhaps I had gotten used to it. Time flew by and my Mom realised that I was no longer using my bicycle. Not even touching it. It was just gathering dust and was, in my Mom's words - "a criminal waste of space in the house." So, she decided to sell it off. And all this happened without my consent, when I was at college. She not only sold MY bike off but also my dad's. And what did she get for it? She got ripped off by some thugs who paid only half and to pay the rest a little later, but never did.

When I reached back home, I was shocked to realise that I've lost my love. The two bikes were no more my property. No more little scoots around the neighbourhood, no more fixing a flat tyre, no more chain grease all over my pants and no more joy-rides. That was a sad day. I still keep scolding my mother if ever she brings up the topic of bicycles.

My dream now, is to get a bike with all the bells and whistles that I always wanted. A 21 speed gear shifter, disc-brakes, alloy wheels, and the part that hurts the most (literally) - a custom made saddle for my Bum.

I've seen a lot of these on road these days but cost more than any standard 100cc motorcycle does. Phew! The prices almost make me faint. And I have no Idea how people, who have it, have it. Is it worth paying almost 30K for a bicycle? What do YOU think? oh loyal reader of my blog.

Recently, to my relief, I've seen a few Hercules' bicycle ads that are bringing bikes with all the features that I mentioned, called the "Roadeo" for under 10K. That is great, indeed. Still nothing comparable to the 1600 rupees that I paid for my Hero ranger in 1994. Well, times have changed, steel prices have sky-rocketed owing to the Olympics in China. And then there is the other major villain called "Inflation" whom our Government is portraying a picture of trying to control it but proving to be terribly lousy at it.

If there are any generous souls out there reading this obscure post of mine, a kind request to you - if you have any bike that has gears and all that jazz and you are no longer using it, please donate it to me. Don't let it go to dust. 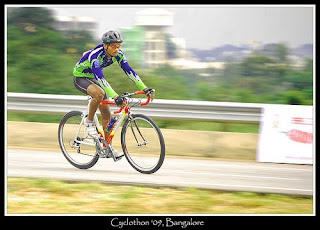 With that, hopefully, in some months (or years), I would possess my love back. The recently held BSA cyclothon has renewed my interest in cycling and was one of the main reasons for getting my lazy ass to get up from bed and make this post early Sunday morning. So, Thank you BSA cyclothon, although you are long over and I did not participate. I would love to participate in the next year's edition. By the time which I hope to have bought a good bike.